Enter The Haggis and Two Hour Delay played at the Westcott Theater on March 5 in Syracuse, New York. The theater has played a role in the band’s history including the recording of their 2015 album Live at the Westcott.

Two Hour Delay opened up to kick off the show. Highlights from the Syracuse natives included “Two Hour Delay” and “Seed.” The band had a nice mixture of country, folk and bluegrass influences going on throughout their set.

Many of the band’s songs came off like jams because they rolled on long and the guitars played off of each other well. Two Hour Delay finished their set with Enter the Haggis multi-instrumentalist Brian Buchanan on the fiddle.

Enter the Haggis came out after Two Hour Delay finished their set. The Canadian Celtic rock band started off the set with loads of energy. Classic songs from their set included “Gasoline,” “One Last Drink,””No More Stones,” and “Lanigan’s Ball.”

The band also brought out covers from different genres. The band played a cover of Michael Jackson’s “Beat It,” which they played in honor of the song hitting number 1 on the Billboard charts on March 5 in 1983.

Multi-instrumentalist and creator of the band Craig Downie proved to be one of the most versatile band members of the night. Downie played everything including the guitar, trumpet, harmonica, tin whistle and even the bagpipes. Buchanan played well on the fiddle and guitar and kept the crowd energy at high levels throughout the show.

Trevor Lewington switched off of lead vocal duties with Buchanan and did well in both the position of lead and support vocals. Drummer Bruce McCarthy and bassist Mark Abraham both played the part of support to help lay down the foundation of sound for the music.

Enter the Haggis will continue their tour on March 6 at Hugh’s Room in Toronto, Ontario, Canada. Two Hour Delay will play at Shifty’s on March 26 in Syracuse, New York. 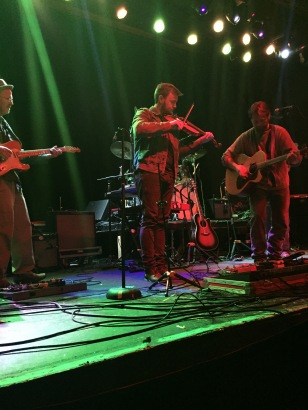 (Brian Buchanan and Trevor Lewington of Enter the Haggis)