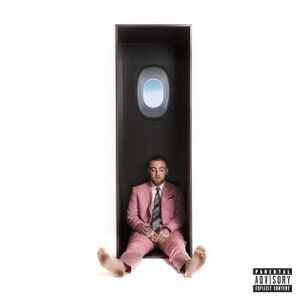 Amazing. Marvelous. Superb. All words I would use to describe my first thoughts coming off this album. The past year has been a ride for Mac Miller. Originally making headlines for his time spent dating pop icon Ariana Grande, he then held a negative social view for when the relationship ended and dropping a single the day Grande released a single of her own. He was accused of trying to sully her important day out of bitterness. I hope that was not the case. Either way, we the listeners got a taste of what Miller was preparing to release. Weeks later on August 3rd, Swimming was released to the general public and boy did it blow me away. Listeners have come to the conclusion that the entire album is a dedication to his time in the lime light with Grande.

Their time together is hinted at within ‘What’s the Use‘ when the lyric “Time we don’t waste much, **** and we wake up; They have her sing just like Celine Dion; catch me if you can, you never catch me damn” since Grande has a Celine Dion impression she does. The following track ‘Perfecto’ seems to be about the break up and the possibility of missing her with lyrics such as “Bare feet, runnin’ late, her car started; Even though the only thing that she driving a hard bargain; More important is I’m kinda sorta out the door; But she put me back together when I’m out of order.” Fans are crediting his relationship with Grande for such a power piece of work.

For myself however, the tracks that are the best of the album would be ‘Self Care’, ‘Ladders’, and ‘Small Words’. I hear very soulful pieces that attempt to emphasize his true feeling in the three tracks. Making it more possible to communicate his thoughts to us, the listener. There may be portions of the album where he would sound whiny or groaning about the past, but in those instances he has his best sound. The entire album manages to keep my attention upon every listening. Having an artist manage to do that should be a top priority for everyone, and not just myself. Swimming is an amazing listen and is such a pivot from Mac Miller’s roots as we also saw in 2016 with The Divine Feminism.  I will continue to support Mac Miller in anyway because his music has been a huge part of my life and is always a reliable listen.