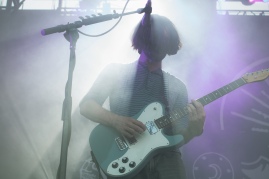 During the middle of July, what is better than a concert by the water and on the sand? That is exactly what Festival Pier in Pennsylvania has to offer. On July 28th, Taking Back Sunday and Coheed and Cambria took the stage with a little help from The Story So Far. The trio was a perfect arrangement of different styles of rock. The Story So Far played a newer version of pop punk that catered to the younger audience that found their way to the show. The crowd responded well to their style by crowdsurfing and singing along to their music. As they were finishing up, the venue was slowly becoming more packed with people who either decided to stand front and center or even decided to enjoy the music from the side near the merch stands. 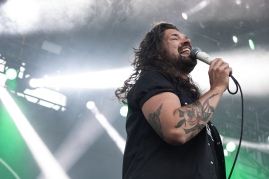 Wherever you were during Taking Back Sunday’s set was enjoyable. The band was lively on stage with a backdrop catering to their most recent album, Tidal Waves. But what would a Taking Back Sunday set be without Adam Lazzara’s signature mic swing? The fans showed up for a performance and Taking Back Sunday sure did deliver. Aside from the band itself, I found that one of the most enjoyable parts was watching the people in the audience. The ages varied from people in their twenties, their thirties, their teens, and even parents’ who brought their children to the show. There was one little kid who danced to every song while wearing headphones and a few people would stop to dance with him before rejoining the crowd. In addition to that, I saw people running from the merch and food lines the second “Makedamnsure” began, a clear crowd favorite. Coheed and Cambria carried the same energy in their set and the crowd was far from slowing down.

Not only was this one of the most enjoyable concerts I have been to in a long time, I could tell the energy was unmatched on this summer night. It was a perfect concert and I look forward to getting an opportunity to experience a Taking Back Sunday Set again.