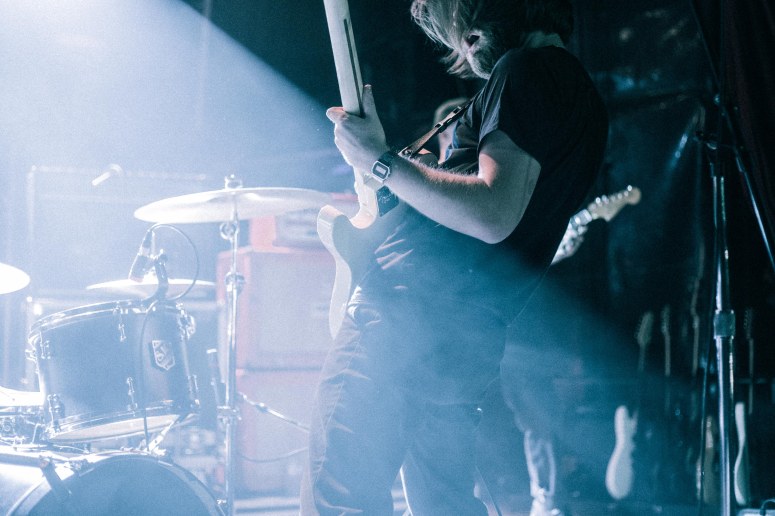 Intro and Interview by Chandler Poczciwinski

I first discovered Super Whatevr while I was scanning through all the bands that currently had tour dates scheduled in my hometown of Buffalo, NY. When I came across the name Super Whatevr, which was unfamiliar to me at the time, I gave them a listen as I do with every band coming to Buffalo. What I found was something truly special, a genre-expanding, lyrically significant, up-and-coming band with a feel that is truly their own. After discovering the masterpiece called Super Whatever, I knew I had to attend their headlining tour date in Buffalo, with support from Dube and Beach Goons. So, with a good spirit and camera in hand, I went to go see what the hype around Super Whatevr was all about. That night I was treated to an intimate and beautiful performance from Super Whatevr, fronted by the one and only Skyler McKee. Skyler announced mid-set how they were going to get some legendary chicken wings from Buffalo after the show, and if anyone in attendance wanted to join they were more than welcome to come. While a few people from the crowd expressed interest, my girlfriend and I were the only people to actually take up their offer. I am so glad we did; what I found was a band who is just as down to earth and humble as their music. Skyler McKee, frontman and only permanent member of SW, is a true personification of his music. Quiet and humble with an undeniable spark, a person who you could truly talk to for hours. With that being said, we were lucky enough to catch up with Skyler before he hit the stage at his recent performance in Toronto.

So how is the tour with Set It Off going so far?

It has been good, people have been showing up to the shows which is good, and some dates have been selling out. We have been having fun letting all the kids on stage, just trying to be rowdy and making it as wild as possible.

I was reading how you had a really great show at the Amityville music hall a few days ago, could you talk about what made that show so special?

Yeah, no barricade haha. And just a lot of people singing along, when people interact with us it adds a whole new energy to the show.

So, we saw you for the first time during your headlining tour with Dube and Beach Goons. Has there been a drastic change in crowd reaction since we last saw you?

Well, you will see tonight. Ever since we did the tour with Waterparks we actually have fans now, and it is pretty wild, people just singing along and just losing it, it’s great.

So, I know you have been playing the songs off Never Nothing and Good Luck for a while now, do you have plans on hitting the studio anytime soon or do you plan to continue touring?

I believe studio time will be in April, so right after this tour ends. I am going to start working part-time, and I will be in the studio for almost the whole month I believe, we are still trying to lock it in now.

Do you know who you are going to be working with to create this new project?

Uh, I can’t really say because I am not entirely sure. If I know for certain I would tell you but I just don’t know yet. There has been some talk, but nothing definite yet.

So, on your previous records Never Nothing and Good Luck you don’t really have a defined sound, every song has its own unique sound. After playing these songs for a while now have you found a sound or direction that you would like to take your next record?

So what are some of your new musical influences for this new record?

Uh… Post Malone… I have been listening to the radio a lot recently. I just really love what I am doing now. I really enjoy reaching people and impacting people, it is really amazing. But I am also broke and getting married. I really just want to make music, I feel like I write decent melodies and lyrics or lyrical content, but I feel like with a better production Super Whatevr could be a lot more approachable for a mainstream audience. The new album is about my parent’s divorce, they aren’t technically divorced yet they are just like apart from each other, but the record is really about how that affected me and caused me to lose faith in God and get therapy and getting help in general.

So, would you say Never Nothing is about the struggles of mental health/mental illness and this next record is about trying to get help and beating mental illness?

Yeah, I always wanted the records to be a trilogy, I have been thinking about it for like six or seven years and it is working out where shit in my life is making it that way. I am not really allowed to say what the new album is called yet, I am not sure if you saw it on twitter, I put it up there and then management made me take it down. The first record “Never Nothing” is all about how it really is never nothing, like not coming to terms with the things happening in your life. Instead of dealing with things you just say, “it’s nothing” and that’s the start of vulnerability. I want to help take people through the process of healing emotionally, just like basic therapy, that is what the second record is about. Realizing that there is a problem and learning to deal with it.

Do you have a plan for the third record already?

Yeah, I have had one for a while. A big reason that Hopeless signed Super Whatevr was that I already had all three records written.

How has your life changed ever since you started Super Whatevr?

Well, I am getting married so that is cool, we have really been put through the wringer because of touring and stuff. I have gained a lot of fans which is great and I feel like I have helped a lot of people. I always wanted to help people but I really didn’t know if I was going to impact anyone but every night kids tell me their stories and how this has helped them off the ledge. So, I feel really special that I can actually help people. With no set members, it has been hard to find people with similar values or similar ideas about what being a touring artist is, so that has been miserable, trying to not hurt people’s feelings with different expectations. Other than that it has been fun, Hopeless is great and my manager is awesome, my PR agent is awesome, really my whole team is amazing. I am really just so in love with my label and I am just so happy.

Do you think being on the road with your fiancé brings you closer together or causes more hardships?

Both, she used to just come for a week at a time but now she is tour managing and like selling merch. It is so great because she is a type A personality, if she is sitting around she will constantly be looking for a way to be put to work. It has been really cool working together, in our relationship we work together really well because she is more of a “I know what I want” person and I am much more of like an emotions cry baby. So the dynamic of being on tour is pretty similar to our dynamic back home in terms of the shared roles. I really like it, there is a lot more bickering on tour because tour sucks but other than that it is awesome.

Okay so I don’t want to make you stand out in the cold any longer, but is there one last thing you would like to say to all your fans?

Uh, thanks, thanks for sticking around I don’t know why everyone likes the EP and the record because I think it all sounds like garbage, but thank you for sticking around. I really appreciate everyone for enjoying it, thank you for liking my message and thinking I am an okay guy. I don’t really know what I am doing but let’s keep doing it because it seems to be working well.