RIYL: Headley, Down With Webster, All Time Low 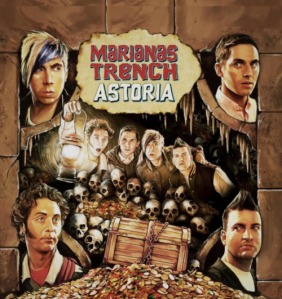 Astoria is the second in a line of concept albums that the Canadian pop rock band, Marianas Trench, has released. This album acts as a sequel to their previous album, Ever After, which was about a couple breaking up and then finally at the end of the album they get back together. The story can be experienced just through listening to this album without knowing it’s a follow up to the previous album and is best listened to in one sitting from front to back.

The title track and opener, “Astoria” is where you first learn about what happened to the couple from Ever After. The line “goodbye mother’s fairy tale/never after will suffice/when star-crossed lovers take their lives” not only tells you that their relationship didn’t work out and sets up for the rest of the song and album, but includes a clever play on the concept of Ever After just being a fairy tale and it really is just never after. Another really clever line in the song is “do you know everything happens?/It happens in threes”. The song is all in threes; three part harmony that repeats three times and the song is in ¾ time. The main question brought up in this song that really sets the album up is the line “Do I survive you Astoria?” and since astoria is another word for a story, he is asking if you survive your story. The album follows from there. The song is a near 7 minute behemoth. It is one of the best albums on the album and it shows how clever songwriters they are.

“This Means War” is where lead singer Josh Ramsay talks about them seeing each other for the first time after the breakup and the line “I hate to admit it, but I miss the war” speaks on how he misses the contact they had with each other, even if it was bad. Other than content, the song is one of the most uptempo and happy songs on the album. Ramsay shows off his ability to hit the high note over and over through this song and the rest of the album.

The witty songwriting, Josh Ramsay’s iconic voice, the story that the album tells and the range of emotions it makes you feel make this album nearly flawless. Every song plays an important role in the development of the story and it shouldn’t be spoiled anymore than what is written here. If you can listen to both this album and Ever After it would make for the best experience but if not, this album can be heard on its own. Astoria is sure to end up a classic in the pop rock world for years and years to come.