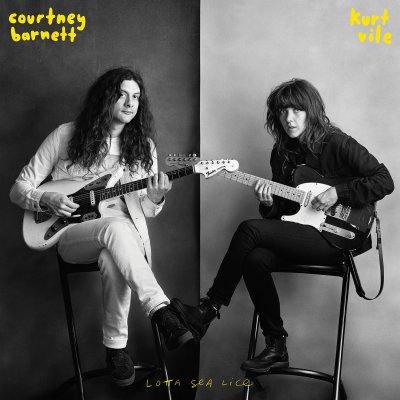 Lotta Sea Lice, the new album authored and performed by indie-alt pioneers Kurt Vile and Courtney Barnett, combines the perfect amount of great songwriting with talented musicianship to create a great and new sound. Both artists bring their own elements to the table and do not force their own sound over the other. Instead of clashing visions, the two have created music that is neither Vile nor Barnett, but rather a new and exciting style for the pair.

The first track on the album, titled “Over Everything,” is a laid back mellow jam, reading almost like a conversation between the two artists. The jangly guitar and smooth solos add to the songs’ immense depth. The sound quality is unreal. You can hear almost every layer of music that Vile and Barnett have plunged themselves into. The producers of this album really outdid themselves.

“Let it Go” follows next on the album and is quite like the first track lyric-wise, but has more of a War on Drugs feel to it. Slower and synth-like. The guitar is less like a guitar here and sounds more techno-inspired. The drums are rapid at intervals and create a garage band drum machine feel. The vibe is entirely technological and still, while not one of the better tracks on the album, it’s a good song. “Fear is Like a Forest” is next and is one of my personal favorites from the album. The song starts out with a “Mary Jane’s Last Dance”-type riff built with Vile’s extremely Petty-esque flat voice. The whole song sounds straight out of the 70s like a duet between Tom Petty and Grace Slick from their respective golden eras. The next song, “Outta the Woodwork,” has the same Petty feel to it.

“Continental Breakfast” is a heartfelt acoustic piece that combines folk with indie. The acoustic guitar and rustic, scraping folk drums combine with Vile’s ringing Fender Jaguar that slides like oil over the top of the melody. The lyrics resonate with honesty and strike at the heart of the listener. The next song, “On Script” is a mellowed out slow jam that highlights Barnett’s smooth and thick vocals.

“Blue Cheese,” another one of the top tracks on the album, has a lighthearted guitar intro that is followed by Kurt Vile’s Lou Reed style vocals and lyrics that sound like something from Dylan’s Highway 61 Revisited. Altogether, one of the best songs I’ve heard in a while. “Peeping Tom” is one of the more forgettable songs on the album but is good enough to deserve a spot on the album.

The closer, “Untogether,” is a great end to a stellar album. It combines the acoustic brilliance of Barnett with Vile’s electric feel to reflect upon the great new sound they created. All in all, I recommend listening to this in its entirety. A truly great album from two truly great artists.