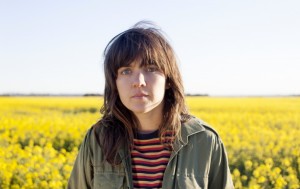 Courtney Barnett’s Sometimes I Sit And Think, And Sometimes I Just Sit stands along with some of the top albums of the year, but Barnett goes for more with a collaboration with Third Man Records. Barnett teamed up with Jack White to produce two songs for Third Man Records’ Blue Series. “Boxing Day Blues”(Revisited) and “Shivers” both were produced in the Third Man Records studio in Nashville, Tennessee while Barnett was on tour.

“Boxing Day Blues” and the revisited version both have different sounds to them. While the original is acoustic, the revisited version opts for a jangly electric guitar. The lyrics are also modified in some places to create a different version of the song. The songs share the same lifeless vocals that give them her classic melancholy view. Shying away from the original ballad sound, the song transforms into a bluesy rock track.

The other song off of the release is a cover of the Boys Next Door’s song “Shivers.” Barnett does justice to the cover by adding her depressing voice to the mix. The song rarely picks up through its relaxed guitars and slow paced drum beat. Compared to the cover, Barnett’s voice has more gruff to it and causes it not to sound like post-punk. Even with the punky sound, Barnett delivers a great interpretation of this Australian post-punk classic.

Barnett’s two songs add a little special flair to the 2015 she has been having. Even though it is a small project, we get to see a collaboration that is unusual. With the collaboration of Jack White and Courtney Barnett, there is a mixture of both artists’ styles and it combines punk with blues rock to make a new sound. Both songs carry different meanings from their predecessors, and leave some fun interpretations.