Well, Nathan Williams and the gang have done it again. The American rock group released their fifth studio album, V, and it’s not really anything too exciting.

Now don’t get me wrong, I’m a pretty solid Wavves fan, but I’m not too fond of bands that make songs that always sound the same. Unfortunately this album is one of those things.

I really like their sound and their past album, King of the Beach, was my obsession over the summer. This album just doesn’t bring anything new or interesting to the table. Plus, it doesn’t help that Nathan Williams got into a debacle with the band’s label and did a bunch of dumb shit before the album was released. It’s disappointing since I am a fan of the group and V just sounds like it was thrown together.

The good news about this album is that it at least has a theme going. The album is about a breakup and the band’s bad habits. The bad habits include drinking A LOT of beer (like 100 beers) and bottles of Jameson during shows and tour. The guitar and upbeat drums make 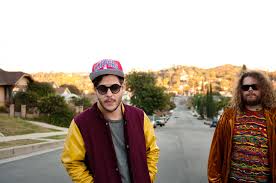 tracks like “My Head Hurts,” or “Heavy Metal Detox,” songs that you can easily jump around to and go crazy for at one of their live shows. They wrote about having a good time and used beats that will make you have a good time as well.

A band like Wavves that usually puts me in a good mood has left me with an 11 tracks of disappointment. It’s not the worst thing, but if I can’t tell the difference between songs, it’s just not for me. Sorry Nathan Williams, I’d still party with you, I’ll bring the Jameson.